IWW E70 IN EUROPE AND IN POLAND

The International Waterway E70 (Rotterdam – Berlin – Kostrzyn – Bydgoszcz – the Vistula Lagoon – Kaliningrad – Klaipėda) links Western Europe via the Berlin Waterway Junction and the northern region of Poland, with Kaliningrad, and further on, with the waterway system of the Neman River. IWW E70 connects with IWW E30 on the Oder River and with IWW E40 on the Vistula River.

In accordance with the European Agreement on Main Inland Waterways of International Importance (AGN), only waterways meeting at least the basic requirements of class IV (minimum dimensions of vessels 80 m x 9.5 m) can be considered as international waterways. Newly constructed sections should, however, meet the requirements of class Vb as a minimum, and sections being modernised – class Va.

The Polish section of the IWW E70 is a picturesque and diverse one, with 636.7 km in length. It runs from Hohensaaten that connects Oder with the Oder-Havel Canal, and further down with the Vistula River via the rivers of Warta, Noteć, Brda, and the Bydgoszcz Canal. The Warta is the third longest river in Poland, whereas the Noteć slowly meanders along green, peaceful meadows. IWW E70 runs down the Nogat River and meets the Vistula Lagoon where it crosses the Polish-Russian border, and flows to Kaliningrad down the Pregolya and Deyma rivers to the Curonian Lagoon and the Klaipėda. The IWW E70 also includes the Szkarpawa and Elbląg rivers, as well as the Jagiellonian Canal.

The remaining locks are mainly non-electrified installations dating back to the turn of the 20th century. The width of the waterways varies from 16 to 25 metres, the minimum radii of the bends are 200 to 250 metres, and the minimum bridge clearances are 3.5 to 4 metres. The guaranteed depth equals between 1.2 and 1.5 metres and the maximum permitted speed limit for vessels is 8 km/h.

The route has been the site of dynamic investments – both local and private – almost along its entire length. The most spectacular projects implemented in the years 2010-2021 which have significantly improved the waterway infrastructure include: the redevelopment of the eastern boulevard in Gorzów Wielkopolski; the construction of marinas and harbours in Gorzów Wielkopolski, Santok, Czarnków, Drawsko, and Nakło nad Notecią; the construction of marinas in Bydgoszcz, Toruń, or the construction of the Academic Sports Association AZS marina in Toruń. As part of the project “Żuławska Loop – Development of Water Tourism. Stage I”, a network of harbours and marinas was build or modified in Tczew, Drewnica, Biała Góra, Malbork, Osłonka, Rybina, Błotnik, Sobieszewo, Wiślinka, Braniewo, Krynica Morska, Kąty Rybackie, Nowa Pasłęka, Elbląg, and Tolkmicko. The Zygmunt August Boulevards in Elbląg and the marina in Nabrzeże have also been modernised and adapted to the needs of tourists. These are just some from the numerous initiatives by local governments and private investors that have improved the quality of inland navigation in Poland.

In Western Europe, the majority of the IWW E70 meets the requirements of the AGN, i.e. it corresponds with the parameters of water class IV and Va.

In some sections, the parameters are being upgraded from class IV to Va or Vb. Class V indicates that larger and heavier vessels are allowed to use the waterway.

In the Polish section, the Oder enters the 83-km-long Oder-Havel Canal through the Niederfinow Shiplift and exists through the Spandau Lock in Berlin. For a major part, the canal runs over a high embankment, where the water level is 28 metres above the valley surrounding the canal. Then, we go down the section of the Havel, called Untere-Havel-Wasserstrasse (Lower Havel Waterway), the Elbe-Havel Canal, and the Midland Canal (Mittellkanal). The Midland Canal is 325 km long and connects to the Dortmund-Est Canal in the west. It was being build from 1905 to 1938, and in 1965, it was decided to upgrade its parameters to class IV. After German reunification in 1989, the eastern section was also upgraded. In 2008, the modernisation of the inland was complete after the new Sülfeld-Sund lock had been opened. This has lead to a considerable increase in the traffic on the canal: from four million tonnes per year (before 1989) to 22.6 million tonnes per year in 2007[1].

Twentekanaal is the next section of the Ijssel Rivel (near the town of Zutphen). It is 47 km long and it leads to the town of Enschede in the east (47 km) and forks in the direction of Delden and Almelo. Unfortunately, it lacks about 50 km to fully connect it with the Midland Canal, and its construction is questionable due to the high costs[2].

The Vistula Lagoon is a body of water divided by the Polish-Russian border. The total area of the Lagoon equals 838 km2, 328 km2 of which are located in Poland. Its width varies from 6.8 up to 13 km and the Lagoon is 90.7 km long, 35.1 km of which are located on the Polish side. It is a shallow body of water (average depth: 2.7 m), thus vessels move only along marked waterways.

Because the Lagoon is shallow (2.7 m deep on average), vessels have to move along marked waterways which allow navigation for watercrafts with a draught of up to approx. 1.6 m. The Vistula Lagoon is home to a network of harbours and marinas that were modernised between 2011 and 2013, mainly as part of the “Żuławska Loop” project. In Elbląg, there is a sea port and marinas approx. 6 m away from the Lagoon.

The canal leading through the Vistula Canal will be open in 2023, connecting the Polish section of the Lagoon with the Baltic Sea. Together with the waterway leading all the way to the port of Elbląg it will be 23 km long and 5 m deep. Currently, the Vistula Lagoon has only one direct connection to the Baltic Sea, i.e. through the Baltic (or: Pilawa) Strait behind the Russian border. Right at the strait, in Baltiysk, there is a seaport and the main base of the Russian Baltic Fleet.

The Vistula Lagoon is connected with the Vistula River through its estuary arms: the Szkarpawa and Nogat. One of them will become a part of the IWW E70.

From the east, the Lagoon flows down into the Pregel, where the harbour city of Kaliningrad is located.

The depth along this section of the E70 are class IV, however, some bridges cannot be classified as class IV, e.g. the bridge in Sholohov with a clearance of 2.95 m. 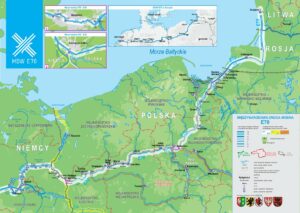 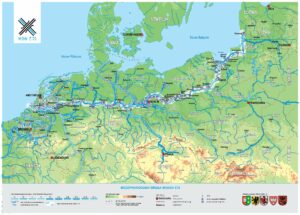 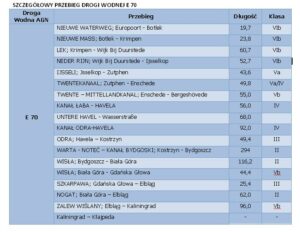