All the locks on the Noteć River and the Bydgoszcz Canal have the same technical characteristics. They are manually operated single-chamber locks, 57.4 m in length and 9.6 m wide. The barrage consists of a gate and a weir. The passage through the lock takes about 25 minutes.

Krzyż (at km 176.20) Head (difference of water levels): 1.85 m. The lock is a convenient mooring site with access to water and electricity. The structure was built in 1913.

Romanowo (at km 122.66). Head: 1.59 m. The structure was built in 1912. The lock in Romanowo is situated at the former Polish-German border and the buildings of the lock were once used as watchtowers.

Krostkowo (at km 68.20). Head 2.08 m. The lock is probably unique in Poland and in Europe. This type of canal lock is called an earth lock (or fscine-turf), since only the heads are made of concrete, and the wall reinforcements are of wood. Along with the needle weir, it is part of the barrage in Krostkowo. During World War II, it was a border facility.

Gromadno (at km 53.40). Head 2.08 m. The lock was constructed in 1914 and its weirs in 1913. A road bridge runs over the lower head of the lock. The lock is made of concrete, with brick and stone facing. Its bottom and cills are concrete. The weirs, just like those at other barrages, are to reduce water level fluctuations. A water power plant is operational in Gromadno, located on the northern weir of the barrage. It was opened in 1995. It can produce a total of 88 kW of energy.

Nakło Zachód (at 42.70). Head 2.72 m. The lock and two weirs (northern and southern) make up the Nakło Zachód barrage. The southern weir and the northern weir together maintain the damming level on the Noteć River. The barrage was built in 1914.

Józefinki (at km 37.20). The clearance under the road bridge along the lower head of the lock is about 6 m.

Czyżkówko (at km 15.95). Head: 7.5 m. Clearance under the technical footbridge: 7.44 m. Built in 1908-1915. It has two auxiliary tanks and one can see them filling in and emptying while in the chamber. The use of these tanks allowed for water saving.

Okole (at km 14.8). Head: 7.5 m. Clearance under the technical footbridge: 6.84 m. Built in 1908-1915. It is here that some episodes of Czterej Pancerni i Pies, a well-known Polish series about WWII, were shot. The gates of the lock were an element of the set when the dam was blown up in one episode. Another well-known scene is when the tank Rudy is destroyed and the tank’s turret falls off. Since 2010, tourists have been able to see the tank’s turret on the top of the slope above the lock.

Przegalina (at km 936 of the Vistula). Specifications: 188 m long, 11.9 m wide. Entrance to the Martwa Wisła – a route to Gdańsk and Górki Zachodnie. Two locks are located here now. The first one (northern) was built in 1895 and in 1992 it was closed down. In 1981, the other, modern and much larger southern lock was put to use. Past the lock entrance, there is a harbour basin of the Regional Water Management Board. Together with the river port in Przegalina, it makes up the Przegalina waterway junction. The lock protects the regions of Gdańsk situated upon the Martwa Wisła from flooding. In 2012, a drawbridge was built over the lock and so another obstacle for boats with masts was removed along the Gdańsk-Vistula Lagoon route.

Gdańska Głowa (at km 0.25). Specifications: 61 m long, 12.5 m wide. Swing bridge opened on demand – the clearance when the bridge is closed is 9.58 m at medium water level, at high navigable water – 7.08 m. It is an interesting monument of hydraulic engineering. The lock was built in 1895, and took its name after the fortress “Gdańska Głowa” (lit. Gdańsk’s Head). This construction opened the Szkarpawa river up to navigation. Apart from the closing gate, the Gdańska Głowa Lock also has a flood-gate. At high water stages on the Vistula, the Gdańska Głowa Lock (just like Przegalina and Biała Góra) is permanently closed until the Vistula level becomes stable.

Biała Góra (at km 0.41). Specifications: length: 57 m, width: 9.53 m. A complex of hydraulic structures separating the waters of the Vistula and the Nogat. The origins of the lock date back to the 16th century when the citizens of Gdańsk and Elbląg sought to regulate the stream of the two rivers. The system of locks consists of the Wielki Upust (‘Big Sluice’) (adjusting the water level of the Nogat), a chamber lock (controlling the flow of water from the Vistula to the Nogat) and a small lock where the Liwa joins the Nogat (not in use). In 2012, a modern marina was built close to the lock.

Szonowo (at km 14.50). Specifications: length: 57.33 m, width: 9.58 m. The lock, along with the newly constructed power plant with a capacity of 0.5 MW, is situated on the outskirts of Malbork and is a typical lock on a cascade of the Nogat. It is hand-operated, and its design resembles the structure of the other locks along the Nogat – at Rakowiec and Michałowo. When the barrage was being constructed in the 30s, designers did not forget about fish migrations. At each weir a fish pass was built. The locks are a great tourist attraction.

Michałowo (at km 38.59). Specifications: length: 57.01 m, width: 9.54 m. The last lock on the Nogat. This barrage was built between 1912-1915. Recently, the Michałowo Lock has been equipped with a a small hydroelectric power plant facility with three turbines with a total power output of 0.5 MW. 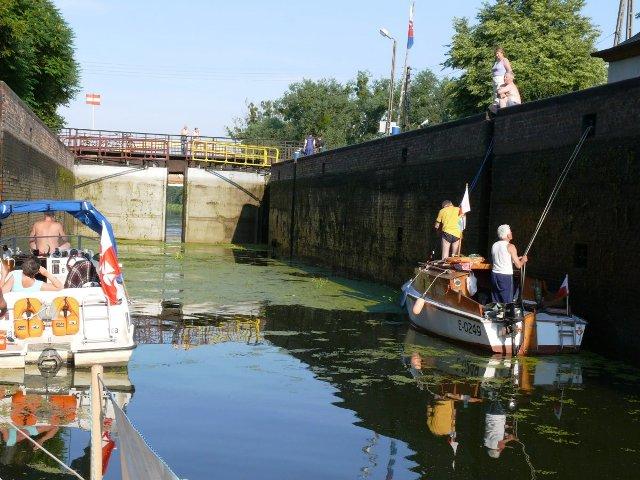