The length of the inland waterways network in Poland equals 3,722 km, 3,513 km of which are used by shipping and only 5.5% of Polish waterways (206 km) meet the requirements for international roads (classes IV and V). The low parameters of waterways and insufficient infrastructure mean they do not play a significant role in the Polish transport system.

In 2019, 4,681 thousand tonnes of cargo were transported by inland waterways and the value of freight transport amounted to 656 million tonne-kilometres. Compared to 2018, there was an 8.4% decrease in transport and the share of inland waterway transport in total transport decreased from 0.8% in 2010 to 0.2% in 2019.

Nearly half (49.8%) of inland waterway transport is carried out as part of international transport. 88% of these transports concern Polish-German relations.

An important feature of inland navigation is connecting centres located far from the sea with large seaports and through them – with overseas markets.

The share of the Polish section of the IWW E70 in inland waterway transport equalled 2.0-3.4% between 2006 and 2998, and 9% between 2009 and 2010. In 2010, inland waterway transport in the area of the IWW E70 amounted to 456 thousand tonnes and was almost exclusively local, as evidenced by an average transport distance of only 4 km. If we want this situation to change, we need to improve the parameters of this waterway, which will create a modern alternative for transporting groups of cargo that should naturally be transported via waterways. Unfortunately, the investments by 2030 planned to improve navigational conditions only on those sections of the IWW E70 which are common to the Oder and Vistula River waterways, and the Vistula-Vistula Lagoon connection. The latter may contribute to transferring part of the east-west transit traffic to the waterways thanks to the Elbląg seaport after the canal through the Vistula Spit is finally complete. Thanks to the revitalisation of the IWW E70, the port will be able to handle transit between Germany and the Kaliningrad Oblast, as well as the Baltic countries (Lithuania, Latvia, and Estonia) and the Russian Federation. Even now – according to the 2019 data – the transport between the Warmińsko-Mazurskie Voivodeship and Russia ranks second best in the category of international transport (after the Zachodniopomorskie Voivodeship and Germany).

The draft of the National Shipping Programme 2030 projects that in 2030 the transport on the Oder waterway will reach approx. six million tonnes per year, and on the Vistula waterway – 0.8 million tonnes.

The strategy teams for the seaports of Szczecin-Świnoujście and Gdańsk provide some slightly more optimistic forecasts. In 2025, Szczecin-Świnoujście seaports are expected to transport 1.1-1.6 million tonnes annually by inland waterways, representing 8.2-11.3% of the total transport volume. The port of Gdańsk is supposed to reach a 10% share of transport via the IWW E70 by 2025, amounting to approx. three million tonnes of transport down the Lower Vistula. It was also assumed that 50% of transports between Bydgoszcz and Kostrzyn will be done by ports along the IWW E70, 40% between seaports, and 10% will constitute international transport.

The above Programme assumes that in 2030 the Oder will ensure good navigational conditions along the entire Polish section of the E30 (which also includes E70), as well as from the port of Gdańsk to the vicinity of Toruń on the Vistula (261 km). The parameters of the section near Bydgoszcz shall be restored to class IV and water regulation infrastructure shall be build near Toruń. Improving the accessibility from land is one of the conditions for the further development of the port in Gdańsk. 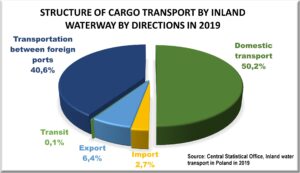 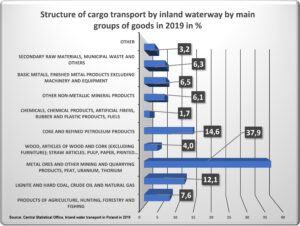