In the Polish section of the IWW E70, the Vistula Lagoon and the river Elbląg, up to the Sea Port of Elbląg, are regarded as inland maritime waters.

Lighthouse in Krynica Morska. This lighthouse is situated farthest to the east of all lighthouses in Poland. Geographic coordinates: 54°23’07.2″N 19°27’03.6″E. Height: 26.5 m Light height: 53 m above sea; Range of light: 18 NM (33,336 km), Characteristics of light: Group of flashes: flash: 2 seconds interval: 2 s, flash: 2 seconds interval: 6 seconds, period: 12 s. It is administered by the Maritime Office in Gdynia. The light and silhouette of the lighthouse can be seen from the open sea and from the Vistula Lagoon.

Beacon towers. Permanent structures – navigation signals on lattice towers, placed on a stable foundation, on stone islands. Some of such beacons mark the fairway of the Vistula Lagoon. Cardinal buoys. They combine the colours yellow and black, and black cones, which are set adequately to the area where navigation is limited by them. They mark the extreme points of shallows, shoals, and other danger zones. Buoys indicating the western edge of a danger zone are colloquially called “Francuzka” (“Frenchwoman”), with two cones pointing their blades toward each other. The eastern edge is marked by “Rosjanka” (“Russian woman”), with cones pointing their blades up and down. The northernmost edge of a danger zone is marked with a buoy called “Eskimoska” (“Eskimo woman”), with two cones facing their blades up. On the southern edge of a danger zone is the “Murzynka” (“African woman”) – a buoy with the two cones pointing down. Sometimes buoys do not have the top cones, only the rod which is painted yellow and black. Such buoys are lit in a way that matches the hours on the clock.

Lateral marks. Green and red buoys define the edges of shipping routes and approach fairways. They are often set in pairs and are referred to as “gates”. The direction of the approach fairway is towards the port, so the red buoys (pole or cylindrical) are on the left side of the fairway and the green buoys (pole or cone) on the right. White-and-red and green-and-red buoys delineate the state border.

Leading lights. They indicate the approach path to the port. In the daytime, they are triangles, squares or diamonds (white or red), placed on special lattice towers, tops of the breakwaters, passenger piers or other sites visible from far away. At night, they emit light. Often, there are two marks – a front and a rear one. One should sail so that the two marks coincide. The front mark is mounted lower than the rear one.

Navigation marks on Elbląg Bay (Zatoka Elbląska). The shipping route runs through the western part of Elbląg Bay. Going from the the Vistula Lagoon, we first pass the “Right Entrance Head” (PGW) a beacon on a green lattice tower with a granite base (group of flashes: 2 flashes in the group – green, with a period of 6 seconds) marked on the map as Fl (2) G 6 s. The PGW beacon and Buoy 10/ELB together create the gateway of the fairway. 10/ELB is a red pole buoy emitting light, with a red cylinder indicating the left side of the fairway. It flashes in the same way as PBW, except that the light is red (Fl (2) R 6 s). Then, the edge of the left side of the fairway are marked with red pole lateral buoys, cylinder-shaped: 12/ELB, 14/ELB, 16 ELB (instead of pole buoys regular buoys may be placed in the shape of red cylinders, similar to typical inland buoys). Next, we pass the “Left Entrance Head” (LGW) – a red lattice tower on a granite base, with a fender and mooring fittings allowing emergency mooring. It flashes red light for a period of two seconds (Fl R 2 s). Heading further on, we go into the river Elbląg, which will take us to the city of Elbląg. 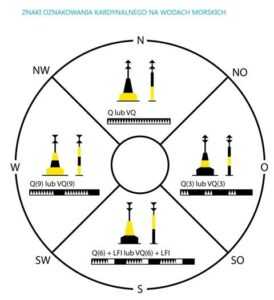