Until the mid-19th century, rivers were the most important natural transport routes which is why towns were mainly founded along them – as centres of economic, social, political, and cultural development. This pattern can be observed even nowadays, with a large number of cities and densely populated regions thriving along navigable transport routes.

The industrial revolution together with the development of railways and later – road transport – has reduced the overall impact of inland waterway transport, however, by the end of the 20th century, the growing awareness of the need for a rational use of energy resources as well as for environmental protection have yet again brought the attention of the public to the advantages of inland waterway transport and the need to reduce the over-representation of road transport.

One of the basic goals of the European transport policy is to combine the two objectives: to maintain mobility as a basic condition for socio-economic growth, and to protect the environment, i.e. to provide conditions enabling sustainable development. Continuing the current trend – which promotes increasing the use of car transport – leads to multiple unfavourable scenarios for the economy, including and increase in congestion and pollution. In this situation it is necessary to undertake measures which will support and promote the development of environmentally-friendly branches of transport, such as inland navigation whose negative impact on the environment is relatively low, e.g. due to:

The low energy intensity of inland navigation is proved by the lower amount of fuel consumed compared with other branches of transport and that also results in considerably lower emissions of air pollutants. Transport is responsible for the emission of about 30% of CO2 in Europe, 72% of which comes from road transport[2]. It is estimated that one tonne-kilometre of freight transported by waterways emits five times less CO2 than road transport and 10% less than rail transport.

Another benefit of inland waterway transport is the capacity. A typical European barge can replace 30‑60 trucks with containers.

Water transport is also great for transporting bulky or shock-sensitive cargo. Many large cities have started using barges to transport, e.g. garbage. It is estimated that this solution has taken 5.5 thousand cars / year off the roads near Amsterdam, and in the UK – around 100,000 trucks.

Inland waterway transport remains one of the safest branches of transport, as proven by the fact that in 2019, the Polish Inland Navigation Office registered only five accidents, and in 2018 – only four. None of the accidents recorded were related to the transport of dangerous goods[4]. 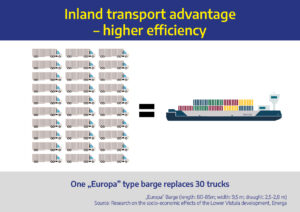 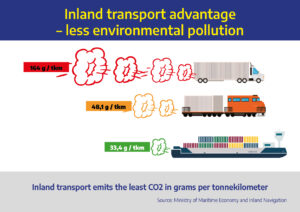 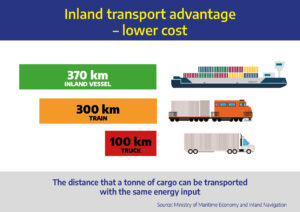