The Noteć is the largest tributary of the Warta (391 km). It is divided into two sections: Upper Noteć (187 km) – from the sources to Nakło at the Noteć, and Lower Noteć (204 km) – from Nakło to the estuary to the Warta in Santok. It is canalised from Nakło to Krzyż (137 km) through 14 water steps (locks and weirs). The remaining section is called the Free Flowing Noteć.

In 2013, Noteć was awarded the title of the most beautiful place in Poland among the areas covered by the Natura 2000 network in the” 7 New Wonders of Poland “competition.

Upper Noteć is part of MDW E70 and the Great Loop of Wielkopolska on a 690 km long route. On the entire route, boaters pass 28 locks and 33 marinas and harbours and almost as many other mooring places await them. It is the longest marked water tourism trail in Poland. The trail includes such “gems” as Poznań, Kalisz or Ostrów Tumski.

On the 187 kilometres of Lower Noteć, there are eight port towns, where you can use comfortable marinas or wharves and 14 locks.

The Noteć welcomes us with a 300-meter-long quay in Santok (226 km). Boaters have access to the most important media here. The wharf is integrally connected with a recreation and entertainment complex, containing a promenade, shelters, a barbecue area, a roofed stage and – importantly for boaters – access to sanitary facilities and showers. In Santok, it is worth visiting the Museum of Santok Settlement.

Drezdenko (188 km) attracts tourists with the World Cultures Park, where mini replicas of interesting objects from all over the world (for example the Eiffel Tower or the Statue of Liberty) stand between the monuments of nature.

Drawsko (174 km) is another town with a new marina (opened in 2011) – with the mysterious name “Yndzel”, which refers to the former name of the peninsula in Drawsko. In addition to standard services, we can take advantage of accommodation rooms with a terrace on … a green roof. The vicinity of Drawsko is also a paradise for mushroom pickers.

There are several mooring places in Czarnków (132 km), including a modern marina with a canoe, bicycle and other tourist equipment rental, opened in 2011, and a river shipyard with workshops, where you can make minor repairs. Czarnków itself is worth visiting, especially on the last weekend of August when usually at least one hundred pairs of twins come to the town for the “Day of Baked Twin”.

In Ujście (106 km), which takes its name from the estuary of the Gwda River to the Noteć River, and from which the Swift Noteć begins. Boaters have at their disposal a river port, a marina with a tourist equipment rental and a mooring pier. The city’s attraction is a large glass factory in operation.

In Miasteczko Krajeńskie (84 km) – about 5 km from the river – there is the tomb of Michał Drzymała, a hero of the fight against Germanization.

In Nakło at the Noteć (40 km), there is a modern marina “Powiat Nakielski”, completed in 2014. There is, among others, water equipment rental, accommodation and workshops of the Inland Navigation Team, where minor repairs of sailing equipment can be made. The Nakielski Poviat was awarded the prestigious Friendly Shore Award for the implementation of actions for the Noteć River.

Those eager to enjoy the picturesque landscapes of the Noteć river can take advantage of the “Władysław Łokietek” and “Jadwiga” cruises that have been organized for many years. Occasionally, cruises are also organized from other marinas. There are also other units – yachts and catamarans – offering cruises on the Noteć River for groups of 8-12 people. 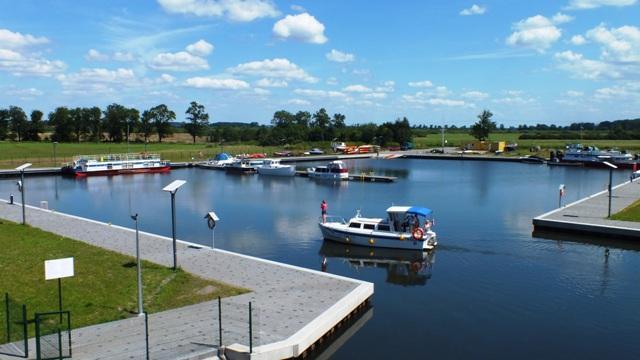