The Route around the Vistula Lagoon

The Vistula Lagoon is a much more challenging body of water than inland rivers, which is why we ought to navigate here on centreboard/keel sailboats. Unfortunately, it is also very shallow, with the depth in some places dropping below 1 m. Keep this in mind and watch out for fishing nets which should be properly marked, but not all of them are fulfilling this obligation.

Most recommended mooring spots are new marinas, built in the second decade of the 21st century, as part of the Żuławy Loop.

The Pasłęka is 211 km long and it is navigable only along the 9-km section to Nowa Pasłęka, where we can find a newly-built mooring platform. The only obstacle here is one drawbridge that is no longer functioning. The Pasłęka can take us all the way to Braniewo (9 km).

Frombork is the largest town on the southern shore of the Vistula Lagoon, with a sea border crossing for yachts sailing to Kaliningrad. The port will be further developed and deepened to 3.5 m – the works started in 2021. We recommend stopping to visit Wzgórze Katedralne (EN: Cathedral Hill), with its medieval cathedral where Nicolaus Copernicus rests, as well as the museum devoted to the most famous Polish astronomer himself, who made his most important discovery – right in Frombork.

Kąty Rybackie is the harbour on the Lagoon which is the closes to the mouths of the Wisła Królewiecka and the Szkarpawa. You can find several marinas here. There is also the Żuławy Wiślane Museum right next to the harbour, and a cormorant reserve – also nearby. These birds are protected in many countries but are becoming quite a hassle for the Vistula Spit. They are destroying trees over an area of 100 ha, which is why experts aim to actually reduce the colony residing in the region.

Krynica Morska is a famous spot for tourists. You can easily navigate from here to Frombork and there are always plenty of yachts in the harbour. You should definitely visit the local lighthouse or climb Wielbłądzi Grzbiet (EN: Camel’s Back) to take a good look over the Vistula Lagoon and the Bay of Gdańsk, from the height of 49.5 metres.

Piaski is the last Polish town in front of the Russian border, offering a marina and beautiful beaches. It is the perfect place for nature-lovers looking for peace and a place to relax.

Suchacz is a small village with a marina, located on the southern shore of the Vistula Lagoon. In 1463, Suchacz was a witness of a large sea battle between the combined forces of Gdańsk and Elbląg defeated the Teutonic Knights – a special boulder commemorates this event.

Tolkmicko is beautifully situated right on the Vistula Lagoon. About 4 km from the town, in the waters of the Lagoon, you can find the so called „Holy Stone” – a former sacrificial altar of the Prussians – which is almost 14 metres in circumference. There is also a marina built as part of the „Żuławy Loop” project. 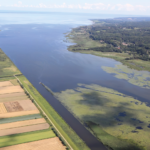 The mouth of the Elbląg River to the Vistula Lagoon. Photo. M. Opitz 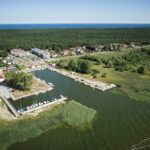 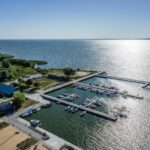 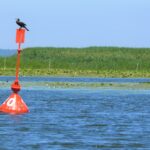 The Vistula Lagoon. Cormorant on a buoy. Photo. DW 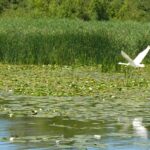 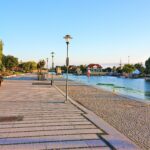 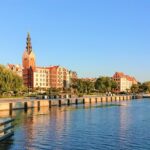 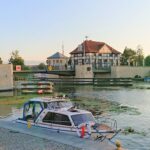 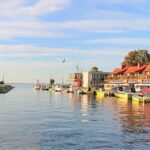 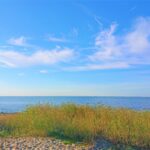