The Motława flows through Żuławy Gdańskie and into the Martwa Wisła at Polski Hak. The section between Polski Hak and Most Zielony (EN: Green Bridge) is considered internal marine waters, while the section from Most Zielony to the “Żabi Kruk” marina, the river is considered a navigable route, under the new Council of Ministers Regulations of 26 June 2019 on inland waterways. The remaining section of the Motława is a non-navigable waterway, dedicated for canoeing.

Vessel traffic. You should watch out for vessel traffic along the entire route, e.g. for manoeuvring passenger vessels, canoes, sailboats, and recreational boats.  You may also encounter a water tram. Because the inland waterways intertwine with maritime routes, navigation markings along the majority of the route are compatible with maritime markings

Bridges. The Motława Route begins at Polski Hak from the right. There is a draw footbridge (1 km), a footbridge to Spichrzów Island and the Zielony Bridge (1.4 km), Krowi Bridge (1.55 km), Podwale Przedmiejskie Bridge (1.6 km), and the Popielny Bridge (1.85 km).

Mooring. There is the „Gdańsk” marina on the Nowa Motława river. It is equipped with electric sockets on the quay and water taps. The new harbour master’s office with sanitary facilities (toilets, showers) can be found in the renovated granary, opposite of the marina. The piers are lit, under video surveillance, and equipped with a toilet waste disposal station. The marina is closed by the Stągiewny Bridge and two towers, located on the right side of the bridge. The clearance under the bridge is 2 m. The “Żabi Kruk” canoe marina, located at the very end of the Stara Motława, was given a makeover and thanks to the Programme for Revitalisation of Waterways in Gdańsk the wharves were modernised and the marina is equipped with all the convenient facilities water sports aficionados might dream of. However, in order to reach it, you must first put down your mast at the Zielony Bridge. Right next to it, you can find a canoeing marine and a water tram stop that share their name with the marina.

You should be very careful because of the heavy traffic. After the long section of the Motława ends, the river turns 90 degrees to the left (1.15 km – Zakręt Motławy – Baszta Łabędź, Rybackie Pobrzeże and the manoeuvring basin for passenger catamarans). Further on, there is the Rybackie Wharf where tourist vessels moor – these are often styles as old galleons and catamarans. Large catamarans use the widened basin to manoeuvre and turn. Always double-check everything when sailing in this area.

Down the “Sołdek” and Żuraw, the Motława splits into two arms (1.35 km). To the left is the Nowa Motława. Forwards, you will continue down the Stara Motława to the “Żabi Kruk” marina. The route (class Ia waterway) is marked – red and green buoys mark the fairway; the bridges are also clearly marked. A manoeuvring basin for ships is also located here. 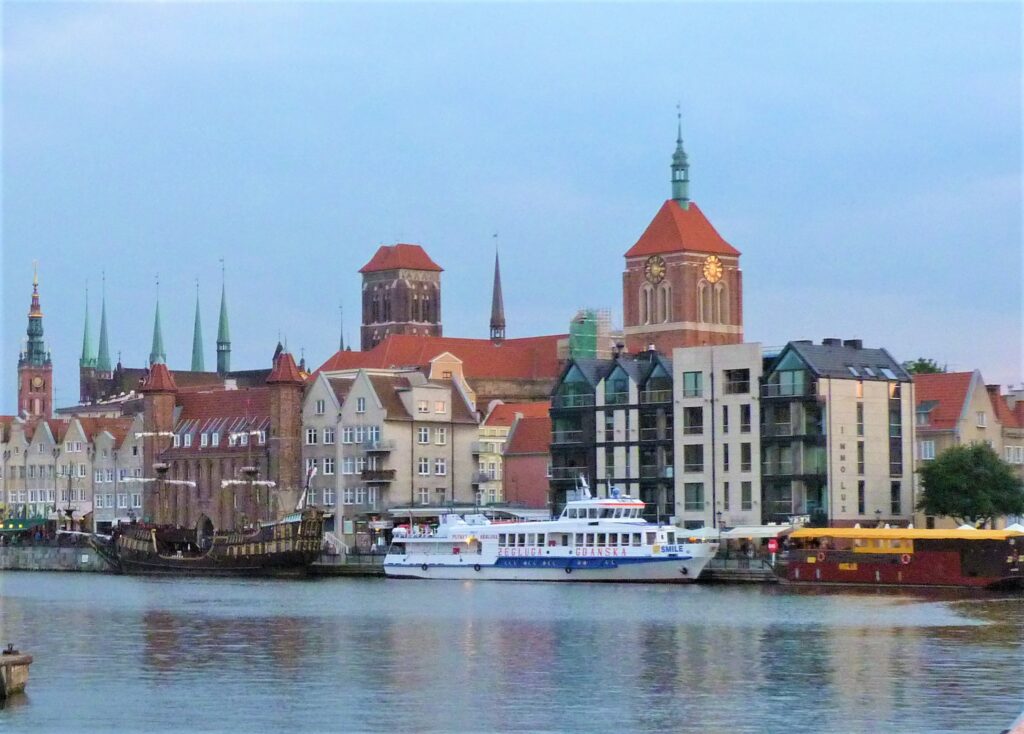